The most dangerous form of skin cancer, these cancerous growths develop when unrepaired DNA damage to skin cells (most often caused by ultraviolet radiation from sunshine or tanning beds) triggers mutations (genetic defects) that lead the skin cells to multiply rapidly and form malignant tumors. These tumors originate in the pigment-producing melanocytes in the basal layer of the epidermis. Melanomas often resemble moles; some develop from moles. The majority of melanomas are black or brown, but they can also be skin-colored, pink, red, purple, blue or white. Melanoma is caused mainly by intense, occasional UV exposure (frequently leading to sunburn), especially in those who are genetically predisposed to the disease. 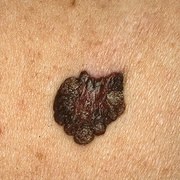 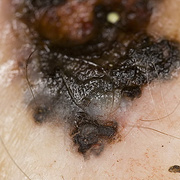 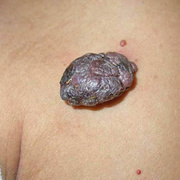