Chickenpox is caused by the varicella zoster virus, which is very contagious. If you haven't had chickenpox before and someone you come into prolonged contact with has it, you're likely to catch it too.

The virus is usually transferred from person to person through the air in the fine spray of saliva or mucous droplets when you cough or sneeze. It can also be passed from person to person through contact with the fluid from chickenpox blisters, either from a person who is infected or by items such as clothing that have been in contact with broken blisters.

If you have chickenpox, you can pass the virus on about one to two days before the rash breaks out. You'll remain infectious until your spots have crusted over, usually five to six days after the illness starts. Avoid contact with others and keep infected children at home away from school or day care during this time.

Once you've had chickenpox, you will usually be immune and probably won't catch it again. However, it is possible to become re-infected. The virus can also remain dormant in your body, even after symptoms have cleared, and cause shingles later in life.

How Do Chicken Pox start

What is Chicken Pox 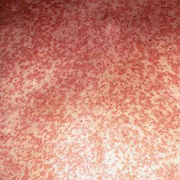